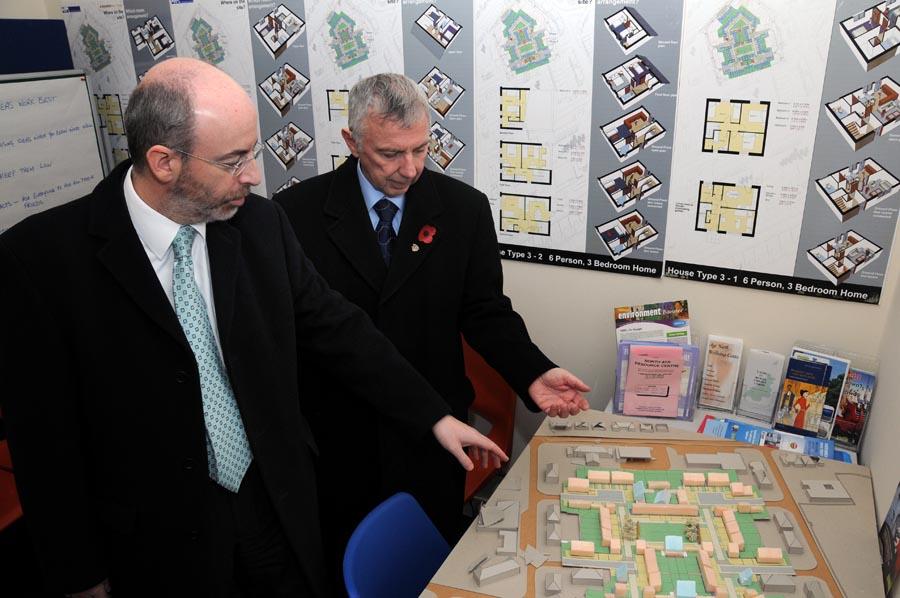 This morning, Stewart Maxwell, Minister for Communities and Sport, officially launched Ayrshire Housing’s 100 house regeneration project in Lochside, Ayr. This is the key element of a joint project with South Ayrshire Council to replace 131 unpopular houses and to provide the catalyst for extensive modernisation works across Lochside.  25 of the new houses will be for sale on a shared equity basis.

Each of the returning tenants has been given a real say in the design of their houses through one to one consultations with the architect, Gordon Fleming of ARP Lorimer and Associates.

Work is expected to be complete by the beginning of 2010 on what  is Ayrshire Housing’s largest development to date.

Alongside the physical regeneration, the Lochside People and Place Initiative managed by Ayrshire Initiatives is working with residents from across Lochside on a wide range of community, environmental and training projects. Highlights to date include the screening of a film produced by a local young people, a photography project which is recording the changing face of the area and a series of placemaking events.

Communities Minister Stewart Maxwell said: “I am delighted to be here today to celebrate the site start of the regeneration at Lochside. This ambitious project will make a real difference to the lives of those who live here and will help create a community that people can be proud of. Progressing this development has only been made possible thanks to co-operation between local residents, South Ayrshire Council, Ayrshire Housing and the Scottish Government.”

He was joined by Councillor Hugh Hunter, the Leader of South Ayrshire Council who said:  “The regeneration of Lochside has been a dream and a vision for the Council and local people for many years, it is now a reality.  This project, involving many organisations, clearly demonstrates that great things can be achieved with teamwork.  We have all worked together to provide the best possible homes and environment for the people who will be living here both now and in the future.  Every step of the way local people have been consulted and their input has been invaluable.”

Mr Maxwell was delighted to meet 2 apprentices from the scheme’s builders Ashleigh (Scotland) Ltd whose training has been facilitated through the Access Construction Ayrshire project. This project  has been made possible by Wider Role funding from the Scottish Government. The two apprentice bricklayers – Mr Jake Callan and Mr Calum Park (to front in photo) were taken on through this initiative in August 2008 as a result of the on-going work undertaken by Ashleigh (Scotland) for Ayrshire Housing. They are currently enrolled in their first year of a modern apprenticeship with Ayr College.

The regeneration area covers blocks in Gould, Mackie and McLean Streets. 25 of the new dwellings will be sold through the Scottish Government’s shared equity scheme. Demolition work took place at the end of 2007 with the main building works starting in summer 2008.

In November 2005, South Ayrshire Council decided to implement a phased programme of demolition and replacement of the housing stock in the area. Following further public consultation, a larger demolition scheme comprising 132 properties rather than the 60 properties originally envisaged was agreed to. This enabled a more coherent strategy with regard to the least popular house-types.

The project will transform the area into a series of “home zones”. Every house will have its own private gardens and car parking. Their design ensures that a range of house needs can be accommodated including a small number of dedicated wheelchair houses.

The total cost of the project is £13 millions and is supported by Scottish Government grants of just over £8 millions by way of Housing Association Grant and the former Housing Estates Regeneration Fund.

A complementary programme of modernisation and environmental improvements is about to commence in the neighbouring South Ayrshire Council owned stock to the value of £2.5 millions.