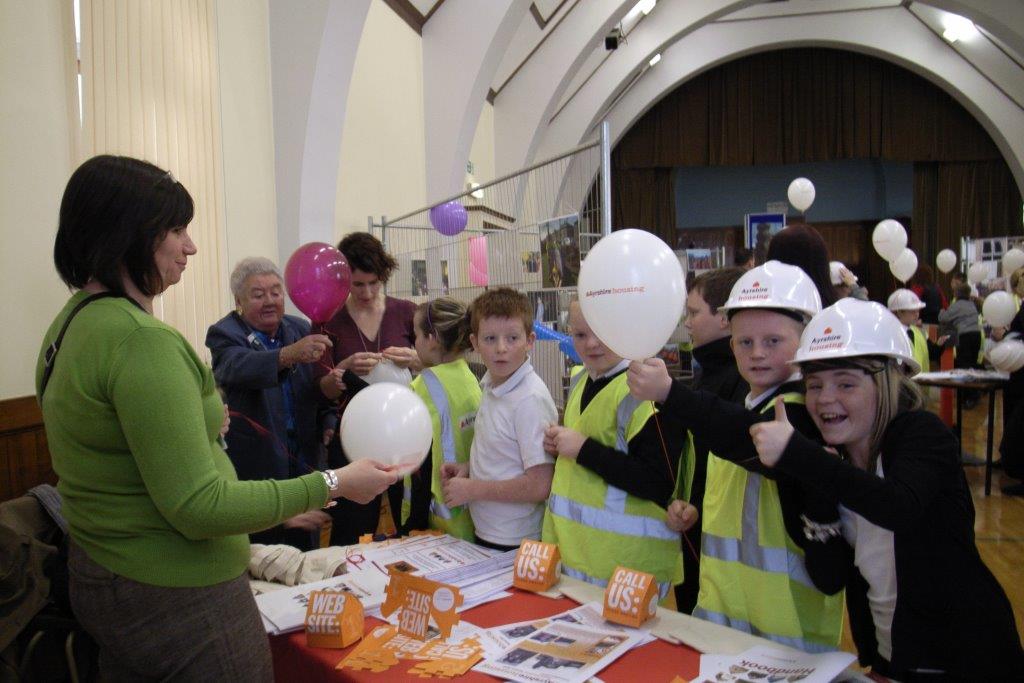 It’s been open house this week at the community centre in Ayr’s Lochside neighbourhood as residents celebrate the transformation of their streets.

Residents showcased the transformation of the area through photographs and short films that they took themselves. A highlight was the presentation of certificates to the  primary 7 class from the local Braehead School. The children had helped to design a new public area as well as writing and distributing the latest edition of the community newsletter.

Speaking at the opening of the exhibition, Councillor Douglas Campbell said “I’m delighted at the transformation that is taking place here in Lochside, It is amazing  to see what has been achieved in only five years since I first discussed the opportunities for real change with tenant representatives and officials from the Council and Ayrshire Housing at a street corner meeting.”

In partnership with South Ayrshire Council, Ayrshire Housing’s latest development has acted as a catalyst for the regeneration of one of Ayr’s poorest neighbourhoods. It is unique in South Ayrshire in its ambition and scale.

100 new houses have been created. They replace 132 unpopular dwellings which were demolished in streets named after the Burgh Councillors who proudly commissioned them in the 1930s. Each of the new houses has its own private garden. They are arranged in home zones to provide a pedestrian friendly environment and designed by award winning Gordon Fleming of Ayr based ARPL architects. The builder was Prestwick based Ashleigh (Scotland) Ltd). The new build development benefited from a £8 million plus grant from the Scottish Government.

Alongside Ayrshire Housing’s new build, South Ayrshire Council has embarked on a £5m programme of improvement works in the surrounding streets. This is being done using the same consultants and contractor to ensure design integration and local economic spin-offs.

The project is about more than just housing. It aims to ensure that the impact of an initial £16 million investment in the new build and refurbishment extends to the wider Lochside community. The People and Place initiative – managed by local social enterprise Aspire2gether – has developed an exciting series of projects which have given the community a real say not just in Ayrshire Housing’s plans but also the Council’s investment in the wider area. These have been supported by a Wider Role grant from the Scottish Government.