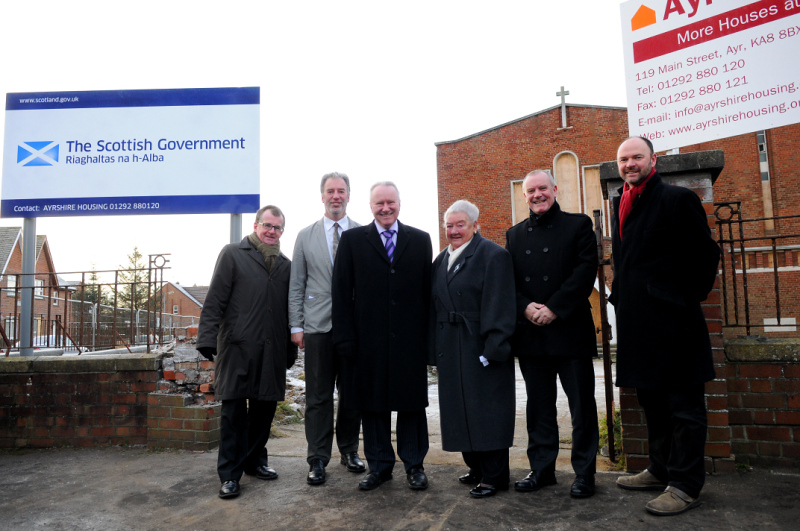 This morning in Ayr, Alex Neil Scotland’s Minister for Housing and Communities launched a new housing development with a difference. It follows eight years of protracted negotiation and planning by the housing association.

It involves the creation of 25 houses for affordable rent alongside the retention of key parts of the Roman Catholic Church’s former Cathedral of the Good Shepherd.

Ayrshire Housing’s Vice-Chair and tenant Pearl Boyd welcoming the support of the Scottish Government and South Ayrshire Council said “it’s not every day that a housing scheme involves the reuse of a cathedral. Even so we’ve met the challenges of the Government’s efficiency drive in delivering this project. We are concerned though that in their draft budget money will be taken away from support for genuinely affordable housing and regeneration projects like this. Instead there seems to be a focus on increasing house building based on much higher rents. Areas like South Ayrshire with large waiting lists may also loose out as money is allocating elsewhere through competitions”.

Mr Neil said ”I’ve lived in Ayr for much of my life and I’m well aware of the local housing pressures. That’s why I’m delighted to welcome this initiative. Scotland is facing a 25% cut in capital spend next year, I want, however, to find Scottish solutions to particular Scottish problems. I don’t intend to follow what is being proposed down south with near market rents and existing tenants contributing as well to new developments with higher rents. Our focus will remain very much be on housing for people with modest incomes at affordable rents. Mid market initiatives like the Scottish Housing Trust are also valuable in catering for people who can no longer aspire to home ownership and in reducing waiting lists”.

Councillor Douglas Campbell, South Ayrshire Council’s Portfolio Holder – Housing and Customer First added ”we’re delighted to be working with Ayrshire Housing on another much needed project. The budget cuts are a real concern for us when we have a waiting list of over 4,500 households. We’re pleased though that we are about to start work on over 60 new Council houses elsewhere in Ayr – the first in over thirty years”.

The total cost of the project is £2.8m. It is being supported by a grant of £1.6m from the Scottish Government. The Government grant is equivalent to just £64,500 per unit, well within the target it sets.